Interview given to Samantha longhi for Stencil History X Book

Since when have you taken pictures in the street? How many do you have today?

Photoblogs contribute a lot to the circulation of street art (fotolog, flickr, myspace, blogspots etc…) what do you think about this?

On Flickr, for exemple, there are more then 100 000 results for word stencil. How do you handle this when you’re a photographer? How do you differentiate yourself ?

Indeed, it’s the Vito legend. Do you have a stencil GPS or do clones work with you?

There is often conflict between photographers and artists when artists aren’t named, for example. What do you think about this?

How do you see stencils today?

Who are you favorite stencil artists?

So i like the work of The Dark (Canada), M-city (Poland), Sten&lex (Italy), Bansky, WCA (Isbach, Artiste-ouvrier-6lex/France), Fremantle (France), DoctorH(Belgium) and many others.

My interest in street art was born when the hip-hop movement landed in France in 1984. I discovered street culture as imported from the US, which meant graffiti as well, thanks to the cult programs hosted by Sydney, H.I.P.-H.O.P.

By the mid-1990s, my interest had turned into an obsession. I became aware of it the day I realized I was regularly standing in the metro with my face glued to the window to see a particular piece as we sped past.

Ever since, I’ve kept an eye out for transfers, graffiti, collages, silk-screens, and stickers in Paris, and have several thousand photos of them. I found them in places ranging from disused factories to wasteland and ordinary streets.

So every Sunday morning while the city’s still asleep, I leave my suburb heading for Paris. These morning pilgrimages see me covering miles and miles of pavement—from the Butte aux Cailles to the Bastille, from the Bastille to République, and from République to Belleville. I peer at walls, the tops of buildings and inconspicuous nooks and crannies, in the hope of finding something original……

Next to New York and London, Paris has always been a major destination for street artists and aficionados. This work features 150 images [By Vitostreet].

Next to New York and London, Paris has always been a major destination for street artists and aficionados. Multicultural and sophisticated, it is a city made for art of all kinds. Nowhere is the pulse of creativity more apparent than in its street art. Charged with colour, humour and social commentary, the 150 images captured in this book represent an open-air museum whose canvases are perpetually transformed. From the city centre to the outer banlieues, from stencil and spray paint to stickers, this collection reveals the creative energy fueling the Paris underground art scene. 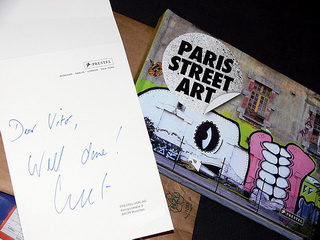 Artistic masterpieces, if you just know how and where to find ROMAULD STIVINE is an art director and owner of the Lazy Dog bookshop and gallery in Paris. VITO DEL FORTE [Vitostreet] is a photographer based in Paris.

One reply on “About Vitostreet”